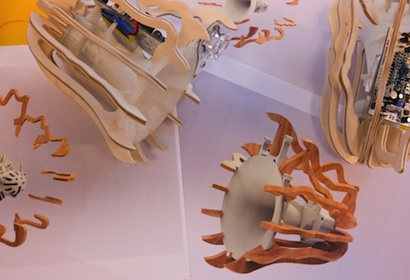 Metatopia is a metaopera, metaformance, and metagaming platform, a laboratory of perception, embodiment and space that extends in a series of installations / dis-concerts / performances / metaformances / urban interventions and home performances.

In an apparent future that could be the present a planetary cyberorganism, or hipercyborg, called Big Data Brother, traces, cuantifies and modulates every movement of every human and non-human body and space. There is a diffuse guerilla of Metabody agents that aim at deprogramming the hipercyborg (Big Data Brother) through mobilizing unquantifiable movements, untraceable behaviors, emergent perceptions and illegible affects, in a counter-reductive move towards increasing diversity of bodies and behaviours, infusing indeterminacy into the system. Metatopia is the architectural, kinetic and perceptual laboratory of the Metabody agents (also called mutant bitches 2.0) who develop dynamic, intra-active spaces, illegible behaviors and unquantifiable affects that exceed reduction to data. Metabody agents are affecthackers and perception hackers that operate in theontological substrata of power and control, XXI century Quixotes that undo the invisible strata of power disseminating diffuse actions across all spaces, a metapolitics for a potential Occupy 2.0 movement in the era of global surveillance.

The program includes Lampyridae by Dieter Vandoren and Matteo Marangoni.