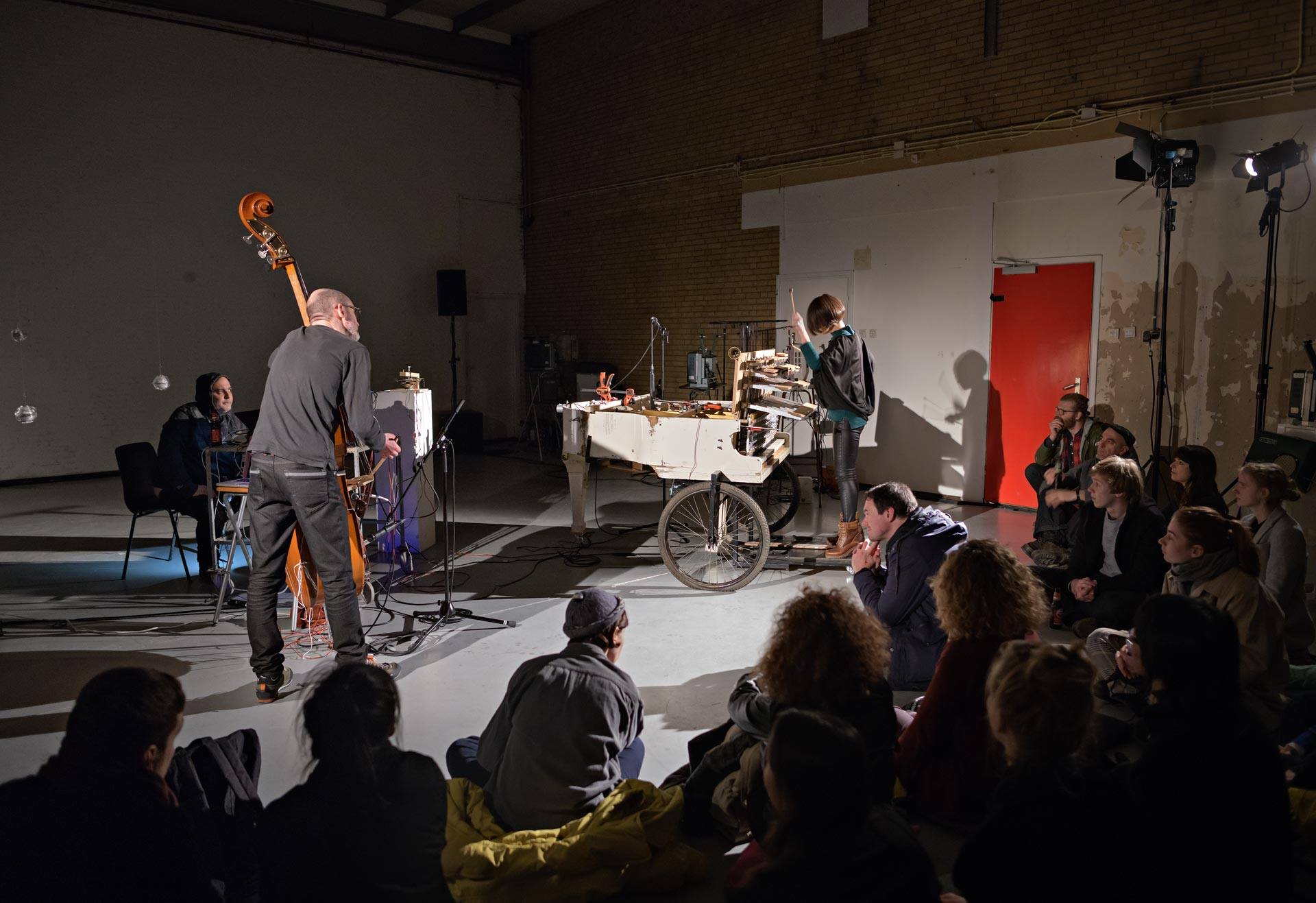 The writings of Mahmoud Darwish from within a Mechano-Organic Synthesiser – representing a free stream of thought and feeling flowing within the mechanics of imprisonment and subjugation. Not directed solely towards the existence of such conditions, but expressing a full range of independent experience to which a mechanism of oppression is merely a contingency, an inevitable backdrop to everything which is valuable and important. The work will aim to maintain the natural flow of the limitless voice from within its contrived mechanical settings and form – exposing the limitations of its existence while its limitless nature is experienced, and describing the workings of the mechanism through broad physical gesture, visual framing and electro-mechanical interactions. This evening will feature an early public presentation of part I of the full project.

No Evil Intent is a SepiaZebra production:

In 2010 composer Roi Nachshon and theatre director and film maker Shiri Limor teamed up to form a music-theatre creative duo – now operating under stichting SepiaZebra. Later that year, they released their first major collaborative work ‘Last day in Corinth’ which was received warmly by both audiences and press, including a 4 star review in the NRC. Duo SepiaZebra have enjoyed the guidance and support of director Paul Koek and the Veenfabriek, and have collaborated with performers and co-creators such as Percussion group The Hague, ensemble MAE, Elsa May Averill, Robijn Wandelaar,  Nina Aalders, Wiek Hijmans, David Kweksilber, ensemble Kluster5 and more. Together with ensemble Klang and Martine Dukker they have presented their latest full scale music-theater work ‘Wagen Volgeladen’ in 2015 and 2016.

Through exposure and adaptation of broad aesthetic principles, as they are manifested in various artistic practices, The duo has gradually developed the idea of ‘abstract-narrative theatre’ featuring works in which stories unfold, however through movement and visual and audial composition, rather than through text and emotional expression.

Shiri Limor studied theatre history, drama and text analysis in the Faculty of Theatre at Tel-Aviv university before studying at the Yoram Levinstein studio for performance arts. In 2006 Shiri came to The Hague to study at the Interfaculty ArtScience at the Royal Academy of Art with the intention to concentrate on original modern theatre creation. As a theatre director, mainly within the music-theatre artistic duo SepiaZebra which she co-established with composer Roi Nachshon, she co-created various works, among which were two full scale music-theatre performances –  Last Day in Corinth with Elsa May Averill, Ensemble MAE and Slagwerk Den Haag, and Wagen Volgeladen with Martine Dukker and Ensemble Klang. Both of which went on to perform on various Dutch podia, including Krozo The Hague, Ostade Amsterdam, Rotterdamse Schouwburg and Compagnietheater Amsterdam.

Hague-based composer Roi Nachshon studied in Jerusalem music academy, as well as privately with Itzhak Sadai in Tel Aviv. He graduated from the Royal-Consevatiore in The Hague in 2006. His work has been commissioned and performed by musicians and ensembles including Ensemble MAE, DoelenKwartet, ensemble Klang, New European Ensemble, David Kweksilber Big Band, and ASKO|Schoenberg. Roi is also part of the music-theater creative duo SepiaZebra, which is concerned with the emergence of organic and systemic behaviours out of intuitive, arbitrary or even entirely external origins.

Ilya Ziblat is a composer and performer. His work features composition and improvisation, using a combination of instruments and live electronics. Searching for new means of expression, he enjoys exploring a wide range of interdisciplinary artistic collaborations with text, dance, visual art, and video. With the group Hatzatz he has performed a program of live music & live video art, and created live soundtracks for several silent films. He worked with the choreographers Loïc Perela (Dansateliers Rotterdam), Leine & Roebana, and Hilde Elbers (International Choreographers Week Tilburg). He composed for such ensembles as Modelo62, ASKO, Ensemble MAE, Meitar, Musica Nova, among many others.

Ilya plays contrabass and bass guitar as an improviser and performer of composed repertoire.

Pete Harden‘s (guitar) and Saskia Lankhoorn‘s (piano and voice) shared history of playing and touring, espying the beauty of the estranging world of travel, inspires their duo Avenue Azure. Almost-songs that trace landscapes, cities and seas, the duo creates atmospheres from other worlds, music of transition, ungrounded in time, that is at once familiar and unfamiliar, shrouding the listener in a dark comfort. “… a virtuoso of contemporary music…” New York Timeson Saskia Lankhoorn, “[his music] forms a phantasmagorical folio” Libération on Pete Harden. 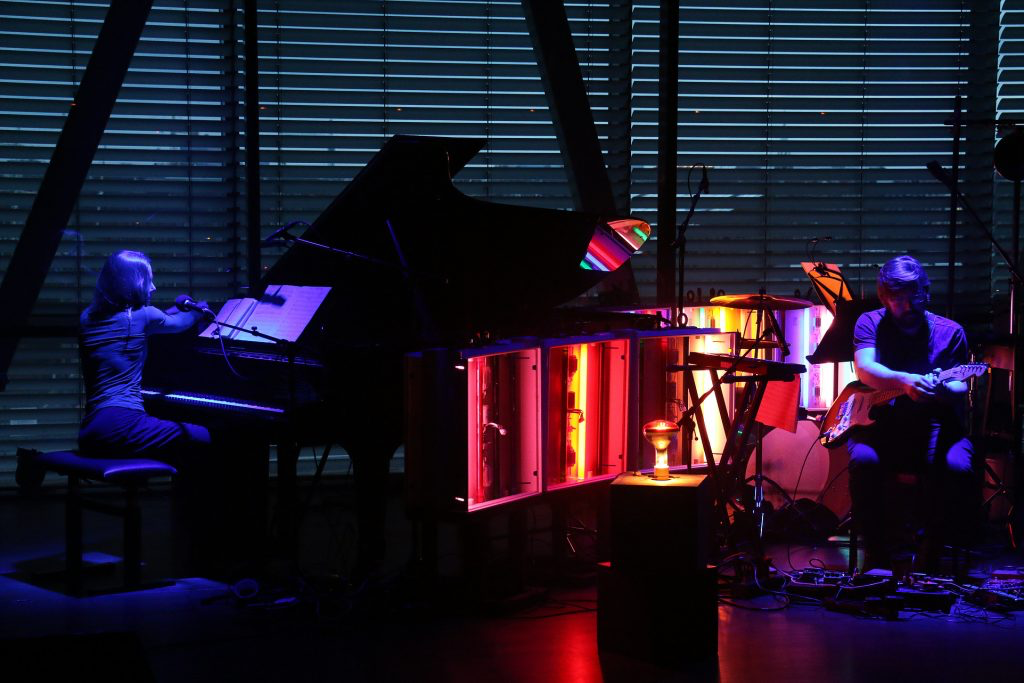 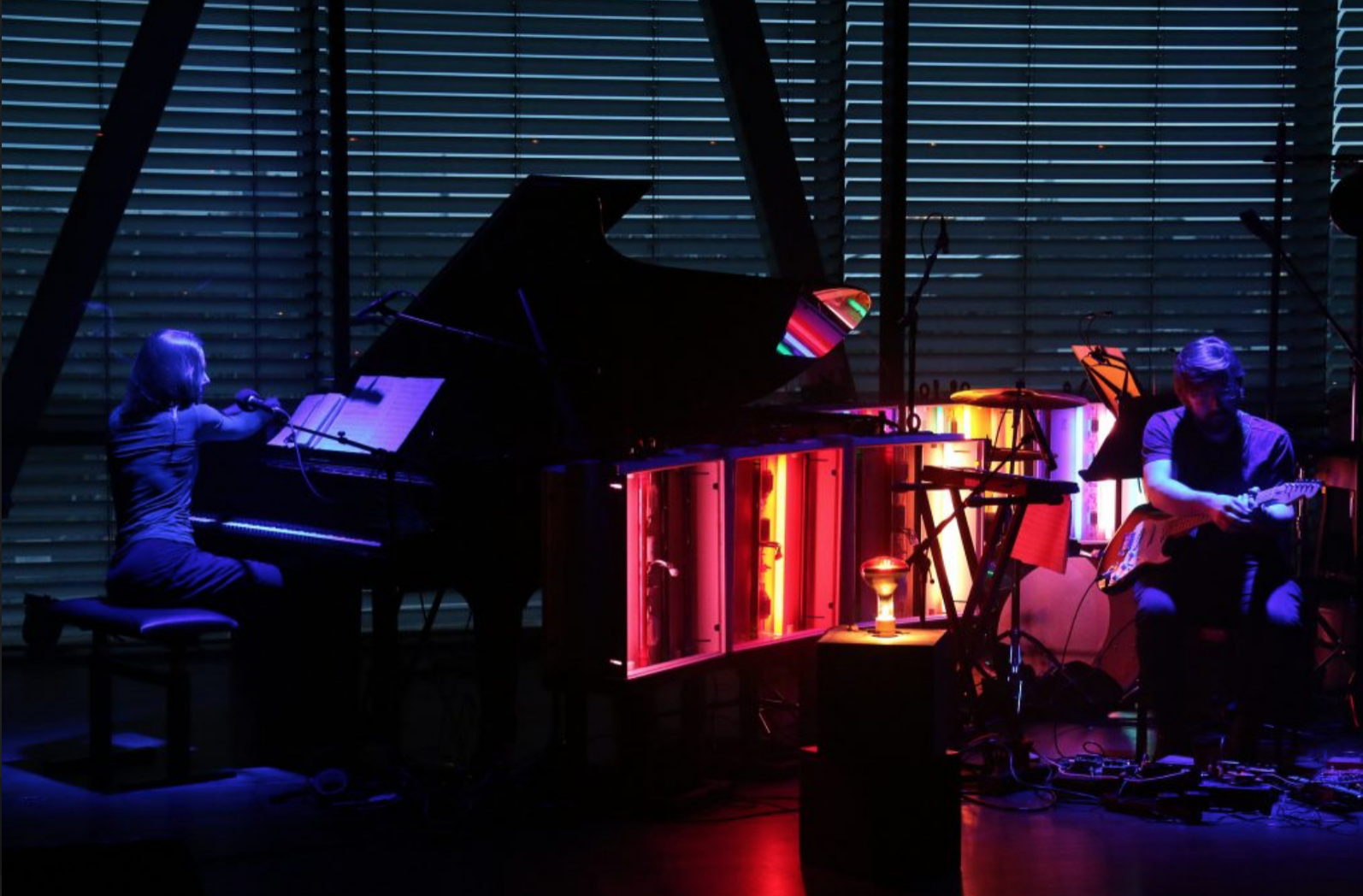