⇆plAy⤴︎! is a night of opposites that attract, of relationships and egotrips, of tension and release, hide and seek, noise and silence, small and tall, rise and fall, flat and round, you and me, him and her, attraction and rejection, ping and pong, vertical and horizontal, motion and stillness, abstraction and politics, strategy and improvisation.

Attila Faravelli sonically explores physical relationships, Semay Wu provokes a duel against her willfull alter ego, and Henk Bakker, Nina Hitz, Anna Mikhailova and Lukas Simonis gather to summon the ghosts of literary icons and play with them across languages and time.

Attila Faravelli is iii’s artist-in-residence in May 2015. He will present some of the unprocessed location recordings that he’s been collecting in the last couple of years. Neither documentary nor purely abstract, these sounds just ‘photograph’ a subjective listening experience within a complex and transitory sonic field. 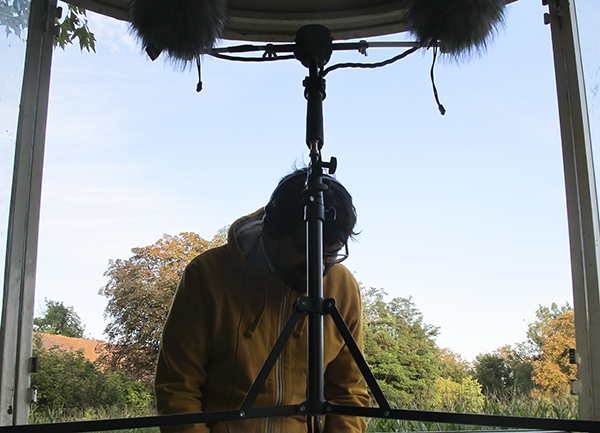 Attila Faravelli (IT) explores the relationship between sound, space and body. His solo music is released by Die Schachtel and Senufo Editions, in duo w/Andrea Belfi (Tumble) he released on Die Schachtel, on Boring Machines with Nicola Ratti, on Presto!? with Nicola Martini and on Mikroton Recordings with SQID (Mario De Vega, Angelica Castello, Burkhard Stangl). With Enrico Malatesta and Matija Schellander he has published on his own Aural Tools editions project, consisting in a series of acoustic devices for relating sound to space, the listener, and the body in ways unavailable through traditional recorded media.

Solo for cello, objects and projection (2015)
by Semay Wu

Semay is currently researching movement through the act of live improvisation. Her instrument, the cello, that has been alongside her, connected and intuit, is the subject of examination. Guiding her way with the idea that our own movements have become entwined so sub-consciously to ourselves, to our experiences and memories, that to understand how we move we must be open to what went before. How does this inform us in the present moment, and can we choose to ignore it? Combining live improvisation with visual elements, to kneading together the relationship between electronics and the instrument’s own sonority, she will try to guide the performance, and provoke a duel against herself. 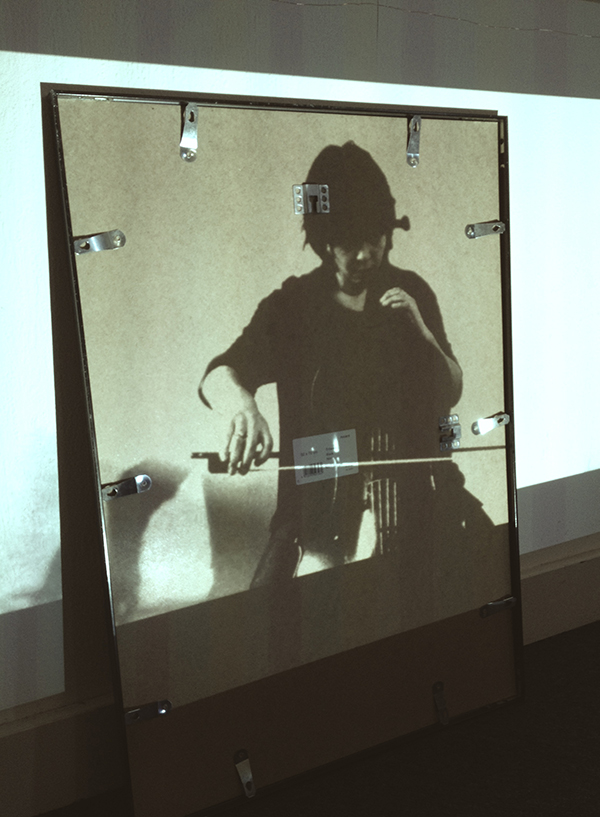 Semay Wu (UK)
Coming from a diverse background of 5 years of classical music training, co-habiting another world amongst a weird and wonderful set of musicians and artists from Manchester where she was based until recently – living in the supposedly opposing forces between absolute accuracy and relativity – this combination led to strange worlds of recordings, improvisations, touring extensively and performing in all sorts of venues and situations. This also led to  compositional work combining music with theatre or dance. Semay Wu came over to the Netherlands in 2013 to attend the one year course at the Institute of Sonology having received, very gratefully, a grant for a year away from work. This has now led her to the Sonology/STEIM Masters programme where she is doing research on the project that she is presenting at Studio Loos on May 28th. Semay Wu currently lives in The Hague.
A kind of live radio play (2015)
with Henk Bakker / Nina Hitz / Anna Mikhailova / Lukas Simonis (NL/CH/RU)

Bakker / Hitz / Mikhailova / Simonis are all active in the electro acoustic music field and each have something to contribute to the context of guttural sounds that are recognized as attempts to communicate, an expressive form that is commonly known as language. The intent of this performance is to do a survey of rhythm and sound translated into the instruments of the band bass clarinet / cello / koto / electric guitar and the different languages that circulate among the band members Dutch / Swiss German / Russian / English. Text fragments derived from the literature of various cultures will be used, such as Willem van Iependaal, Daniil Charms, Robert Walser and William Burroughs. Combined with a significant proportion of their own improvisational skills the musicians aim to create a kind of live radio play which draws its ingredients from these inspiring parts.

Henk Bakker  is a musician, composer, producer and organizer from Rotterdam in the Netherlands. He plays bass clarinet, alto and b-flat clarinet and works with software such as PD, Max, Ableton Live, Pro Tools, Superlooper, Ardour and Logic. The hardware devices he uses to compose and develope soundscapes are the Mikro Modular, MachineDrum, Sherman Filterbank, Waldorf Q, Emu 4000 and 5000, Ensonic. Currently Henk works with interactive and semi interactive software environments, alongside pre prepared sample structures and soundscapes, wich enable him to build musical structures with certain amounts of predictable and unpredictable freedom of interaction mostly with the (amplified) bass clarinet. He has performed contemporary compositions for bass clarinet, with and without tape. These days he studies extended playing techniques and freeform improvisation. His current projects include Ghostride (with composer Huib Emmer); The Xstatic Tics with Lukas Simonis; Subterraneanact, a project with various people that deal with air disturbance and digital grain, such as Robbert van Hulzen.

Nina Hitz was born in Switzerland but has been living in Rotterdam for a long time. A very active, questing spirit who consistently seeks the unknown in life and in music. In addition to baroque music, Hitz is active in experimental music, improvisation and theatrical performances. She has played in theatre- and dance productions by Orkater, Olivier Provily, het barre land, Scapino Ballet Rotterdam, les Ballets C de la B.
Nina Hitz is a member of trio Belfontis with forte piano player Kaoru Iwamura, of Traces and Resonances, with dancer Sato Endo, of Jargon, with leader Maurice Horsthuis and of the bands UIUIUI KOO and liana flu winks. 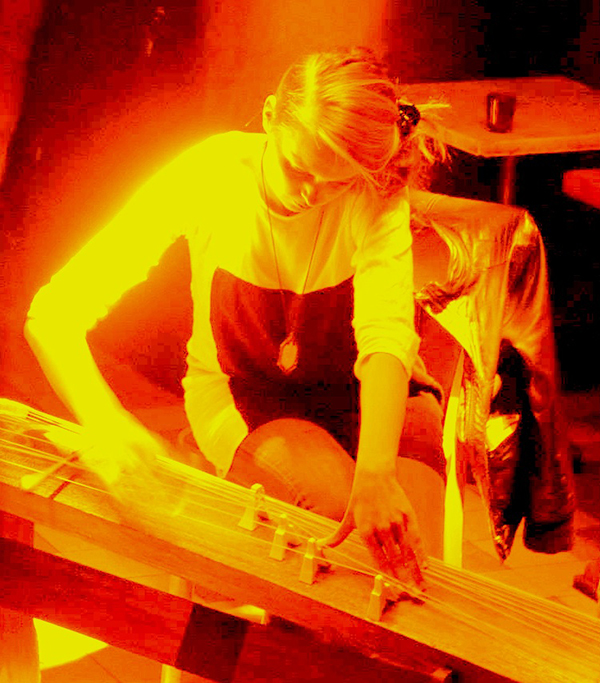 Anna Mikhailova is an awarded contemporary composer and theater director. She was born in 1984 in Moscow and studied composition, electronic music, koto and organ at the Moscow State Tchaikovsky Conservatory in Russia, composition and electronic music at the Royal Conservatory in The Hague  and music theatre at Codarts in Rotterdam. Since 2008 Anna is making operas, interactive performances and installations and exploring the possibilities of many kinds of musical instruments, the diversity of sounds and performing spaces and improvising. Her daily research focuses within the world of the situationists, the notation of sound and the human voice.
One of her recent works, the opera “Sisters” was commissioned by the Diamantfabriek and performed during the Muziek Theater Dagen in Amsterdam in 2014. The opera “Psychogeography. Henri Lefebvre versus Guy Debord” was performed during the Gaudeamus Muziekweek in Utrecht. The composition “Bonus of Binary Balance” was commissioned by the ensemble Klangforum Wien and performed at the Impuls Festival for contemporary music ib Graz, Austria in 2013. Anna’s graphic scores were exhibited in De KetelFactory in Schiedam in 2013 and at Stroom in 2014.

Lukas Simonis has his roots as an instrumentalist and musical ‘activist’ in the industrial music and noise rock of the Eighties ( Throbbing Gristle, the Residents, Pere Ubu, Sonic Youth and beyond). Being part of the Rotterdam jazzbunker scene (a collective that consisted of heavy drug induced punk rockers, freejazzers, early electronic musicians and pre-postrock combo’s) he discovered the delimited world of improvisation. In the meantime & after he played in bands like Dull Schicksal, Trespassers W, Morzelpronk, AA Kismet, Liana Flu Winks, VRIL, Stepmother, Perfect Vacuum and Coolhaven. At the same time he was/is organising concerts, events and films, first at the Jazzbunker in Rotterdam later on the Dissonanten festival, the Dissidenten festival, Popifilm, Dodorama , WORM, a multimedia centre for experimental art and finally stichting KLANGENDUM since 2013.