Books on participation in art

In preparation for the symposium “The Craft of Experience Design”, I have been reading a number of books that deal with the topic from different perspectives. I am briefly describing them here. 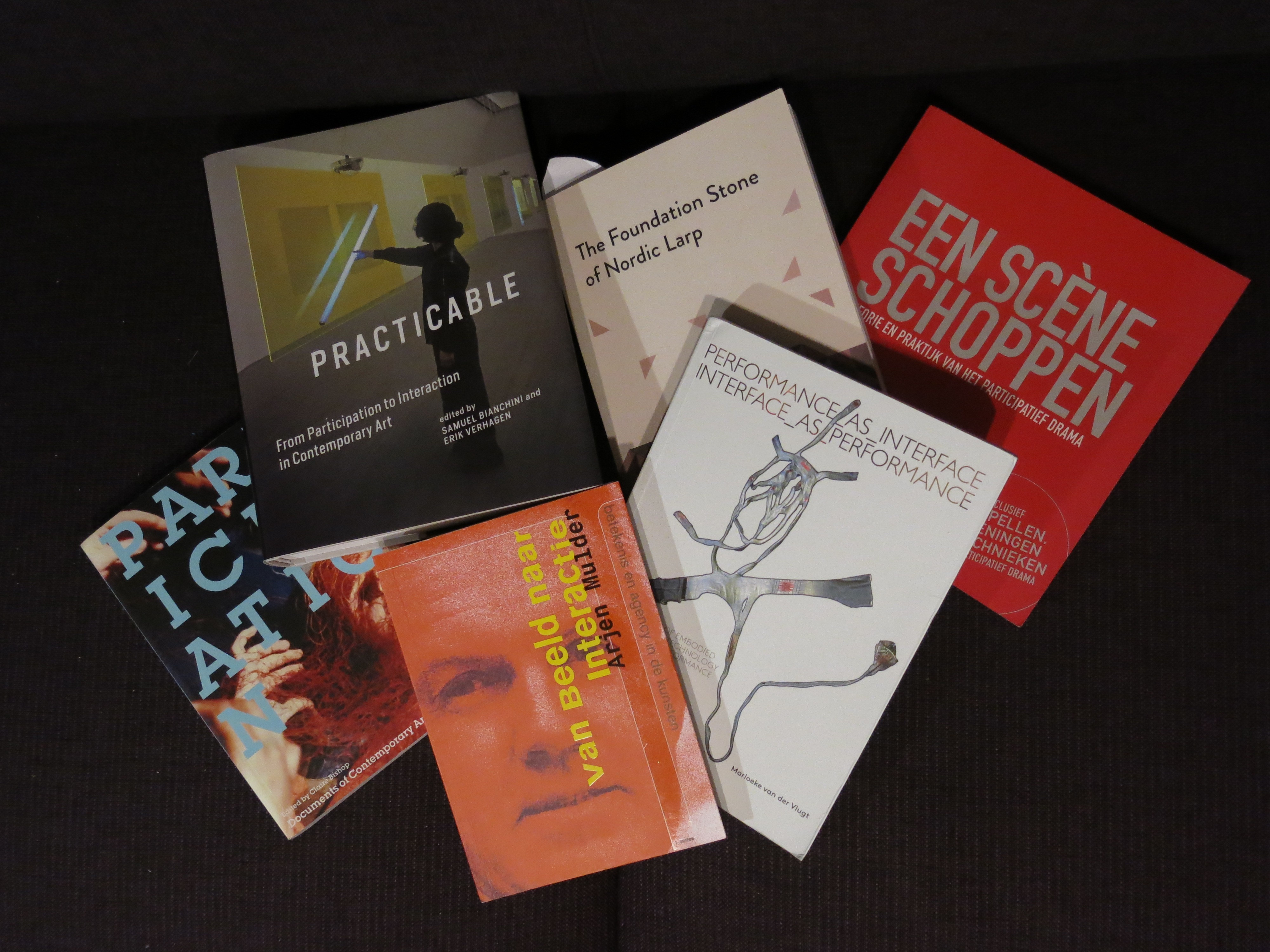 This book is a collection of a number of articles by artists, curators and philosophers about participation in arts. The book charts a historical lineage and theoretical framework to discuss those works in which artists invite spectators to become active participants.

This historical lineage includes Guy Debord who with the Situationist International (1957) was interested in ‘Constructed situations’ – participatory events using experimental behaviour to break the spectacular bind of capitalism (…) in which the audience is an active participant.

Allen Kaprow who in 1966 sought from the happenings a heightened experience of the everyday, in which viewers were formally fused with the space-time of the performance and thereby lost their identity as ‘audience’.

Lygia Clark and Hélio Oiticica who corresponded in 1968-69 on their thinking from interactive sculptural objects to group events that addressed external relations (Oiticica) and interior psychological states (Clark). (…) a key term was vivências, or lived experience: the body’s heightened sensory presence as authentic, immediate, and resistant to ideological capture.

From Image to Interaction

In this book Arjen Mulder traces the history from painting to photography to interactive art. Going from ready-mades of Duchamp, to kinetic sculptures, video installations with moving images to responsive environments and interactive art, where the art ‘becomes art when the visitor does something’.

Practicable – from participation to interaction in contemporary art

This book is a collection of articles on artworks that are realized with viewers’ physical involvement. The articles are presented in sections looking at these practices from cybernetics, art scenes and movements in search of participation, from humanities and social sciences, the art in action – its performance, exhibiting practicable works and a number of case studies and interviews with artists and theorists.

Homo Ludens – a study of the play element in (of) culture

Dutch historian Johan Huizinga wrote about the play element of culture. In this monograph he descibes play as something older than culture ((the English translation uses in the title “in”, although Huizinga was quite adament to use “of”), and outlines how play is expressed in different contexts. He states that all play is a voluntary action and that it is a kind of ‘stepping out of “real” life into a temporary sphere of activity with a disposition all of its own’.

This is a Dutch book on participative theatre from the Dutch group Formaat. Their practice is based on the work of Augusto Boal and his “Theatre of the Oppressed”. The book presents a history of Boal’s work and methods and a number of practical exercises to make participative theatre.

This book is a journey through Marloeke van der Vlugt’s artistic processes in which she searches for new relationships between author-spectator relationships. This includes searching for embodied identity in Second Life, bringing virtual worlds into the theatre, and presenting personal memories through touch.

She describes both her conceptual goals, how she has tried to achieve them in a practical way, and reflects on the results.

The Foundation Stone of Nordic Larp

This book consists of a set of reprints of influential pieces in the Nordic larp discourse. Live action roleplaying, or now rather called just larp, started as a scene in the 1980’s, coming out of the popular roleplaying game Dungeons & Dragons. From these early roots in fantasy fictional worlds, since the mid 1990’s larp started to grow into many genres and playing styles. Since 1996 the Nordic larp scene has gotten together in annual conferences to discuss larp design, and since 2001 also publish about this. The discourse encompasses articles on larp (game) design, the psychological aspects of immersing into a character, reviews on the design of particular games, and educational aspects of larp.