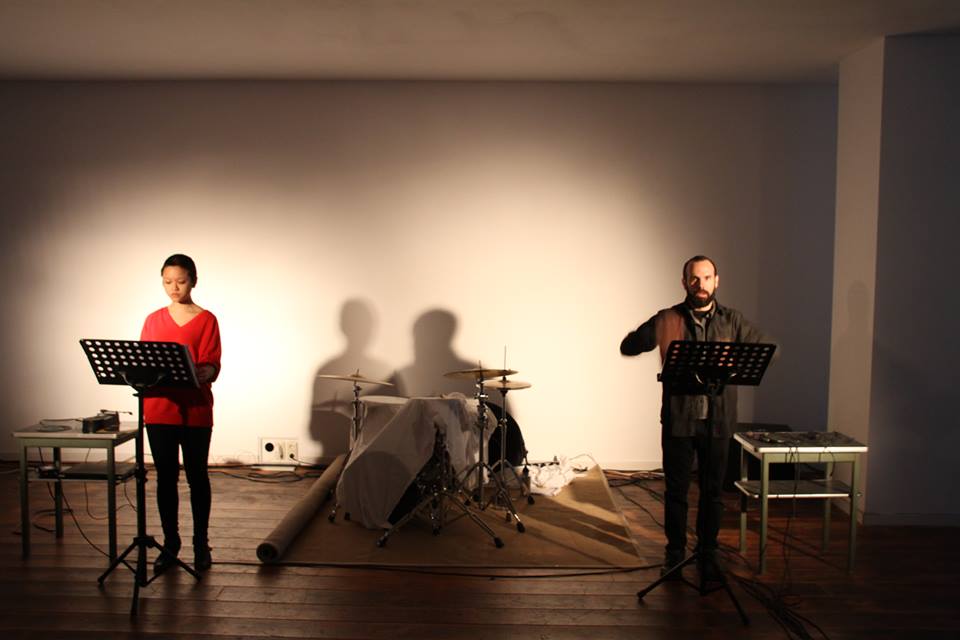 Two performers each write their own short lectures on the cocktail party effect (the phenomenon of being able to focus on one audio source while filtering other surrounding stimuli) as a form of composition through active listening. The lectures are then delivered simultaneously so that audiences are put in the position of choosing to listen to both lectures simultaneously, switching between the two, choosing one over the other, passively receiving the lectures as noise or all of the above.

The cocktail party effect is a well-known psychoacoustic phenomenon characterized by the act of focusing one’s auditory attention onto a single stimulus. The name refers to the experience of being able to listen and comprehend a conversation within a loud, noisy party, thus effectively tuning out all other sounds.

We are well on our way to hybrid existences, dragged by the current of infinite combinations of hybrid cultures. We see this in the mutation/degradation of languages reinforced by typos and cyber-subcultural vernacular, simultaneously inscribing upon and disintegrating our collective vocabularies, memories, bodies. We hear this in genealogies of internet music genres, which are born from the frenetic recollection of cultural memories cut and pasted, chopped and screwed. These are hybrid musical forms that have replicated different cultures and mutated to explosive points. Should we not also attempt to process hybrid sounds within our daily listening practices?

Mix sugar, water and bitters in an old fashioned glass. Drop in a cherry and an orange wedge. Muddle into a paste. Pour in bourbon, fill with ice cubes, and stir. Energetic masking: perceptual interference present in the sensory epithelium.

The human ear is far more powerful than we are mentally prepared for. The displacement of a hydrogen atom of the eardrum is enough to send a signal to your brain. Michael Pisaro observed that this would be tantamount to a light bulb in a vacuum three thousand miles away. While the information received is registered by the brain, it is not yet converted to audio information. It is merely information with the potential to be processed.

As human mixers, would we be able to observe serendipitous synchronicities which may occur between the pulsation of a heart and the flashing of rover fireflies, or listen to the sound amalgam created by the refrigerator in your kitchen and an iceberg grinding on the ocean floor?